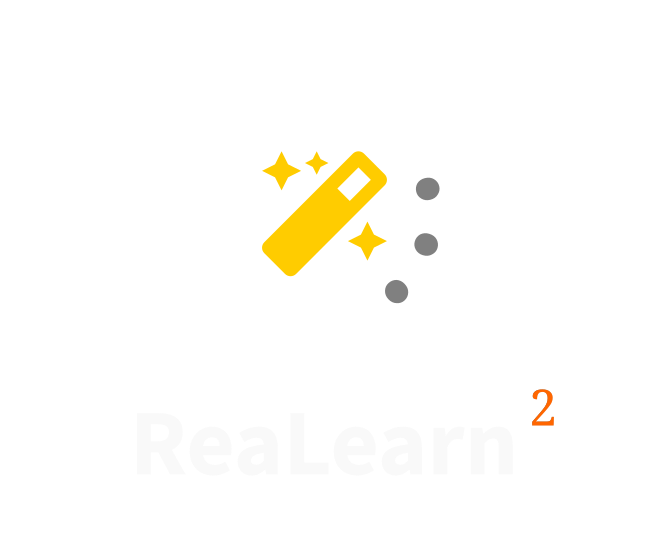 And how does it compare to other projects?

ReaLearn is a VST instrument plug-in for the Digital Audio Workstation REAPER which works in REAPER only. Its mission is to equip REAPER with the most comprehensive and well thought out MIDI/MCU/OSC learn features that one can imagine, while at the same time providing many related features such as MIDI/OSC feedback (e.g. via LEDs, motorized faders and displays). It's especially suited for performers who frequently need to map control elements like knobs or buttons to REAPER functions such as track volume, FX parameters or actions. Since version 2 it's also quite usable as a tool for customizing control surfaces without having to write templates or code.

REAPER itself has a built-in MIDI/OSC learn functionality but it only provides the bare essentials. Many useful MIDI control scenarios are impossible or quite difficult and time-consuming to achieve with REAPER alone, for example if you want to restrict the controlled target value range. You would need to tinker with things like MIDIToReaControlPath and general purpose MIDI plug-ins, which totally takes the drive out of making music. ReaLearn tries to make that much easier and gives you instant access to lots of advanced features on top of that: Controller presets, conditional activation, projection ... and much more.

to get an impression

This is the ReaLearn 2 introduction video. Watch 2 minutes of it to get a first impression and stay tuned if you want to see a few things that ReaLearn allows you to do.

This is the official series of tutorial videos. A perpetual work in progress but all the basics are there already. Very much recommended if you prefer a hands-on approach over a technical user guide!

what makes it special

to LEDs and motor faders

Look at your controller to see what's going on in your DAW.

Group mappings either by using the built-in group feature or by instantiating multiple ReaLearn instances.

ReaLearn tries to guess the character of MIDI CCs when learning them (knob/fader, relative type, button, etc.). Also, it allows you to learn from everywhere by offering global REAPER actions.

Describe your own controllers by creating controller presets or downloading them from ReaPack. Design your main mappings to be controller-independent.

Project a schematic representation of your currently active controller to a mobile device (phone or tablet) in order to see immediately which control element is mapped to which parameter.

the way you need it

Save a bunch of commonly used mappings and reuse them using the built-in preset facilities, FX presets, FX chains or track templates.

Many sources and targets

Activate or deactivate mappings by the press of a button or by switching through mapping pages.

If you want, you can use REAPER's built-in track MIDI routing to feed ReaLearn with MIDI events. That's useful for filtering out control MIDI messages from the MIDI stream or preprocessing MIDI events before they arrive at ReaLearn.

Create mappings on a per-project basis. You don't need to pollute your global action mappings just for the needs of one project. Global usage is also possible by using ReaLearn as monitoring FX.